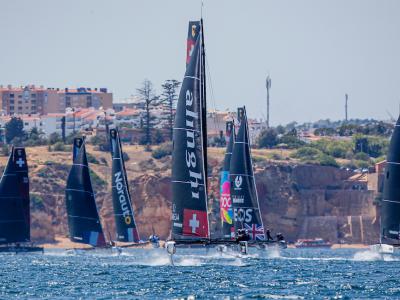 A recap // What: One-design circuit created in 2014 and which will include four events in 2021, contested in Europe. Alinghi competed for the first time in 2015 in their foiling debut, then again in 2019 when the team won the championship. More info is here. Who: Five to 10 international teams bringing together professional sailors and owner drivers. Five team members usually form a crew. Where and when: From July to November 2021, in Portugal, Italy and Spain (click here for the racing calendar). How: The teams compete aboard a 32-foot foiling catamaran called a GC32, in successive 20-minute races launched around buoys. When weather conditions allow, the events take place near the coast. Race tracking options Follow the team via different means during the various stages, each of which is comprised of four days of competition (up to six races each afternoon – but please take note of the fact that the time zones will change according to each event's location). On Twitter @alinghi > Publication of results and assorted pictures and video On Facebook @alinghi and Instagram @alinghi > Interviews, video & photos Online > gc32racingtour.com: Races modeled in 2D (live and in replay) from the first to the fourth days of competition > alinghi.com: News and photos   Équipage du GC32 (SUI 8) Helmsman and skipper: Ernesto Bertarelli (SUI) Co-hemlsman, co-skipper: Arnaud Psarofaghis (SUI) Tactician and mainsail trimmer: Nicolas Charbonnier (FRA) Frontsail trimmer: Bryan Mettraux (SUI) Foil trimmer: Timothé Lapauw (FRA) Bowman: Yves Detrey (SUI) Substitutes: Nils Frei (SUI) and Florian Trüb (SUI) Technical Team João Cabeçadas (POR) David Niklès (SUI) Team Director Pierre-Yves Jorand (SUI) To find out more gc32racingtour.com Hashtags for the events #GoAlinghiGo  //  #gc32racingtour  //  #gc32 Credits for photos © Sailing Energy/GC32 Racing Tour 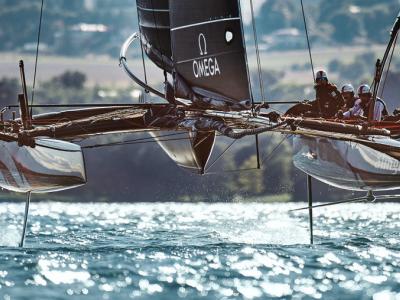 A recap // What: The very first championship for the one-design, multihull foiling TF35s, which follows the format of the Décision 35 competition, but this time with the added dimension of flight over water. All the further info is here. Who: Seven teams made up of six team members (total team weight limited to 500kg) Where: Lake Geneva (Switzerland) for the first five events of the season, then to Scarlino (Italy) for the finale. When: From April to September, the 2021 TF35 Trophy will include seven events: five Grand Prix and two Lake Geneva classics (the Genève-Rolle-Genève and the Bol d'Or Mirabaud). Click here for the calendar How: During the Grand Prix, the teams compete during three days in successive races of about twenty-minute duration and which are sailed around buoys. During the Lake Geneva classics, a coastal course is completed with a start from Geneva, a mark to be rounded (in Rolle or Le Bouveret at the end of the lake) and then a return to the finish line in Geneva. Follow the action There are a number of ways to follow the team: On Twitter @alinghi > Publication of results and assorted photos and videos On Facebook @alinghi and Instagram @alinghi > Interviews, videos & photos On our homepage alinghi.com > News and photos Race monitoring, live or replay > A tracking system will be onboard each TF35 during regattas. Access the 2D mapping via: the TF35 Trophy website, the TracTrac website, or the free app on your smartphone (click here if you have an iPhone, or here if you have an Android) Team for the TF35 (SUI 100) Helmsman / skipper: Ernesto Bertarelli (SUI) Tactician: Nicolas Charbonnier (FRA) Mainsail traveller: Arnaud Psarofaghis (SUI) Mainsail trimmer: Bryan Mettraux (SUI) Headsail trimmer: Nils Frei (SUI) Bowman: Yves Detrey (SUI) Spare crew: Florian Trüb (SUI) Shore crew João Cabeçadas (POR) David Niklès (SUI) Team Director Pierre-Yves Jorand (SUI) To find out more tf35.org Hashtags for the events #GoAlinghiGo // #tf35trophy // #tf35 Credit for Photos © Loris von Siebenthal