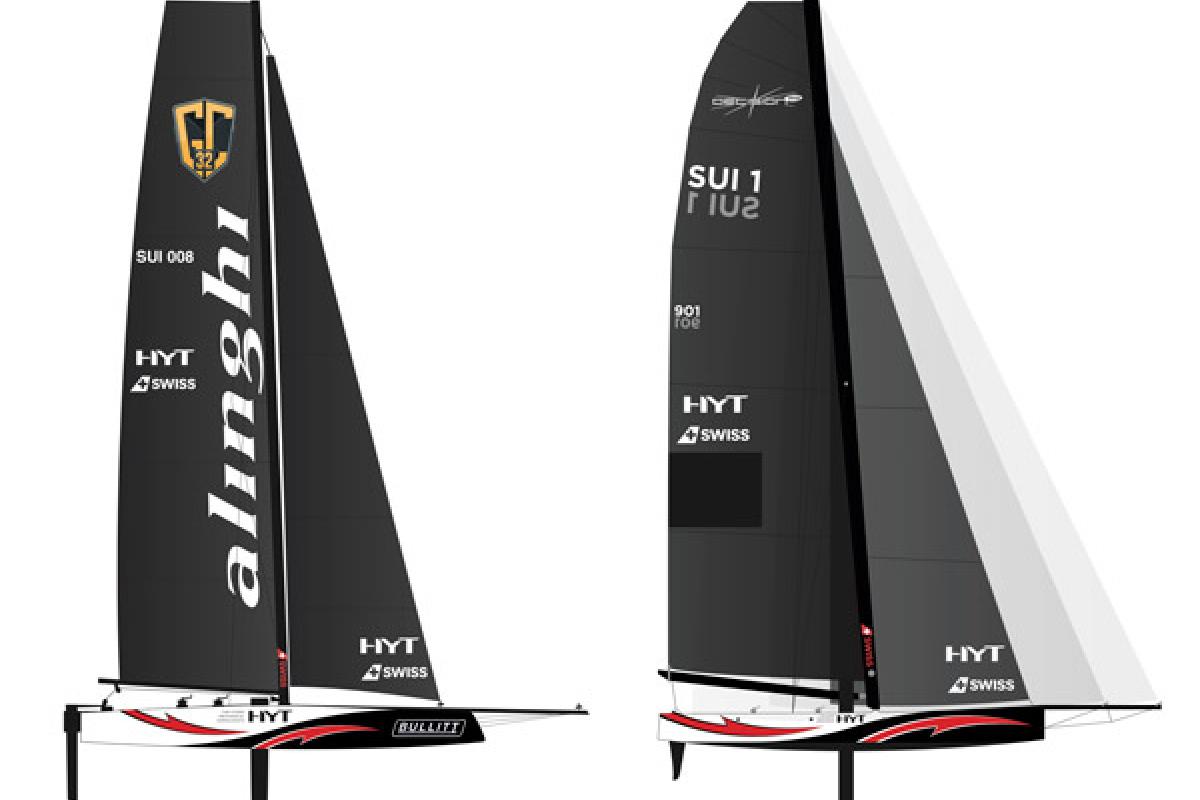 Alinghi, created by Ernesto Bertarelli, won the America’s Cup in 2003 in Auckland under the colors of the Société Nautique de Genève. In doing so, it set a double precedent in the history of the world’s oldest sports’ trophy: A first victory at a first attempt; and the first “European” team to bring the "Auld Mug" back to the continent since the first competition in 1851.

On behalf of the Société Nautique de Genève, Alinghi then organised the 2007 America’s Cup in Valencia, fondly remembered as the best ever and at which Alinghi successfully defended its title in an epic battle on the water against Emirates Team New Zealand.

However, despite Alinghi’s many successes in mono hull racing (Multi One Design, Farr 40, 12mJI, Corel 45, ACC), Ernesto Bertarelli has also been more than present on the multihull stage since 1993. It should come as no surprise then, that, with the creation of a new “flying” one-design catamaran class, Alinghi jumps at the opportunity to join this “foiling adventure”.

The GC32 is a 10m, one-design catamaran, able to ‘fly’ with eight knots of True Wind Speed. This carbon dragonfly has already convinced the top-class sailors from across the sport of its pace, power and ability to ratchet up the excitement levels.

“I have been enormously privileged to sail with some of my crew for more than 20 years. During the course of our adventures, our passion for the sport and for cutting-edge technology has been undimmed. It is therefore only natural that we would be eager to be involved with this evolution of our sport. Sailing in three dimensions will of course be a new challenge for all of us, but it is an exciting one and the opportunity to learn and then master a new type of boat is one that we couldn’t miss. The GC32, as with the D35 and the X40, is a strict one-design class. That’s very important to me, because it means that the racing is not about the equipment we use, but about how the crew works together on the water. It is true competition.”

The same crew will compete on the Decision 35 circuit, albeit with the addition of Coraline Jonet (Trim) who will bring her many talents to the team of six that sail the D35.

Just before the team takes off for this new competition, Alinghi is delighted to announce an Official Air Carrier partnership with SWISS airlines. After all, what better source of inspiration for the team that is learning how to fly on the water in all four corners of Europe?

“This partnership was an obvious one for us and we are delighted to team-up with Alinghi. So many parallels can be drawn between sailing – particularly foil sailing – and aviation. Dedication to giving our best performance, the precision we demand of ourselves and a competitive a passion to be the best are all values that unite Alinghi and SWISS”.

While the team will be flying through the air, its brand new GC32 will hit the road in the expert hands of PLANZER, who Alinghi is thrilled to announce as Official Logistic Transport Supplier for 2015.

“It is our great opportunity and honour for PLANZER to put our expertise at the disposal of such an emblematic team as Alinghi. Having already partnered with the team during the America’s Cup campaigns, it is with a very real sense of pride that we announce this new partnership that will see us work together across Europe this season”.

The GC32s are pushing the boundaries in sailing and so it is with great pleasure that Alinghi can also announce a new sponsor in HYT Watches, a Swiss company that is breaking new ground with its innovative, stylish and beautiful creations.

According to Patrick Berdoz, HYT’s Chairman,

“First and foremost, this partnership is a fantastic union of two high-tech universes and two leading teams. Alinghi challenges the elements and flies over the water, while HYT challenges the traditional watch making industry and masters the measurement of time through the use of fluid. We are very proud to associate ourselves with the next chapter of Alighni’s journey and to be aligned with this epic team”.

Alinghi can also count on another important partner in MarinePool, who have created an Alinghi 2015 collection, available soon.

“Alinghi and Marinepool have been working together for a number of years. When we heard about this exciting new project we were eager to work with the team and to associate ourselves with one of the most prestigious brands in the history of sailing. We are all very excited for the coming season”.

Last, but in no means least, Alinghi is extremely proud to be able to continue to count on the support of its loyal partner, the Manotel Hotel Group, preferred sanctuary of the Alinghi team when in Geneva – and this since 2001.

As Paul Muller, General Manager of the Manotel Group, said:

“On a boat, as with the hotel industry, teamwork is of the outmost importance. Alinghi, as well as Manotel, perfectly represents the perpetual quest for quality that makes our teams what they are – leaders in their respective fields. It is therefore a great pleasure for us that we can continue to welcome the Alinghi crew to our six Geneva hotels and to associate ourselves with the team in the city and on the waters around the world.”