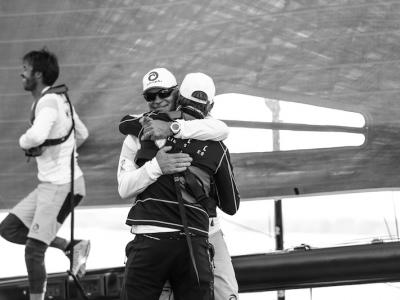 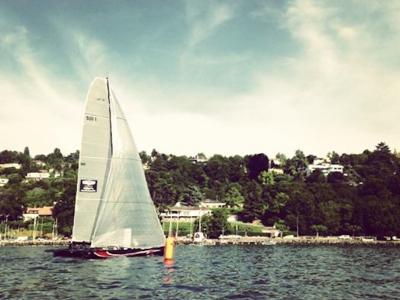 Alinghi wins the Geneva-Rolle-Geneva classic regatta after 4h52min of close combat against Realstone. The gun was fired at 13:00 in Vesenaz, in front of La Tour Carrée, by the Yacht Club of Geneva in very light wind conditions. Alinghi was in the leading group since the very beginning with some very close followers, Realstone and Zen too. After 3:15min of racing, Realstone passed the first mark in front of Rolle two boat lengths ahead of Alinghi, but after a successful jibe battle in front of the Ile de la Harpe, Alinghi was back in the leading position at the second mark located right in front of the Harbor of Rolle. A light breeze pushed then the D-35 fleet back towards Geneva, not far ahead of the first M2. Alinghi crossed the finish line first with Ernesto Bertarelli at the Helm, Nicolas Charbonnier at the Tactic, Pierre-Yves Jorand at the Mainsail, Coraline Jonet & Nils Frei at the Trim, Yves Detrey at the Bow. Sailing continues tomorrow at the Club Nautique de Versoix at 11:30am for 6 races max. The forecast is for little wind again and a very hot day… Let’s bet that the D-35 fleet will battle hard again on the water. Geneva-Rolle-Geneva Results: Alinghi Realstone Mobimo Team Tilt Zen Too LadyCat Powered by Spindrift Racing Veltigroup Okalys Oryx Yliiam Comptoir Immobilier 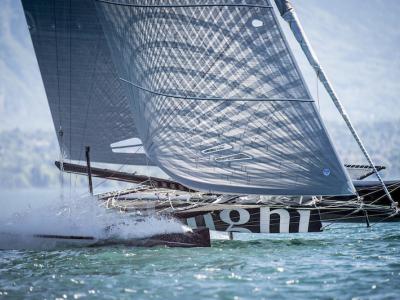 With 6 races sailed on the first day of the week end, Alinghi’s D35, helmed for the occasion by Luc Dubois in the absence of Ernesto Bertarelli, was in 5th place but within touching distance of a  fight for the podium on Saturday night. But the wind decided not to show up on Sunday, which forced the Race committee to cancel racing for the day. Great job by the two young teams of the circuit, Tilt and Realteam who were in first and second places respectively– proof that their hard work during the first month of the year is paying off and that the level has definitely increased on the D35 circuit. Congratulations to LadyCat powered by Spindrift racing who took third place of this Second Act of the Vulcain Trophy, with which – at this stage of the season – they also take first place overall. We can bet that the competition will be fierce on  the first week end of June (7th), at the occasion of the classic Geneva-Rolle-Geneva Race and that every team will use all their tactical tricks to try to win the prologue of the Bol d’Or. A busy week-end ahead for the Teams as they will be racing the first Grand Prix de Versoix on June 8-9, making this pre-Bol d’Or weekend count for double. Ranking of the Open de Crans Tilt Realstone sailing Ladycat powered by Spindrift racing Zen Too Alinghi Mobimo Veltigroup Oryx Okalys Racing Django Ylliam - Comptoir immobilier Provisional Overall ranking of the Vulcain Trophy Ladycat powered by Spindrift racing Tilt Alinghi Realstone sailing Mobimo Zen Too Veltigroup Okalys Oryx Racing Django Ylliam – Comptoir immobilier 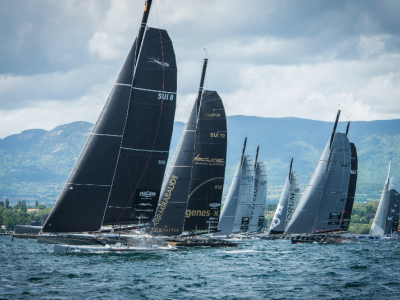 Alinghi opened their account for the 2014 Vulcain Trophy in style, taking first place in the Grand Prix Les Ambassadeurs, which took place over the weekend of the 10th and 11th of May. Highlights of the dramatic racing, as well as interviews with the teams, are all on this video package. 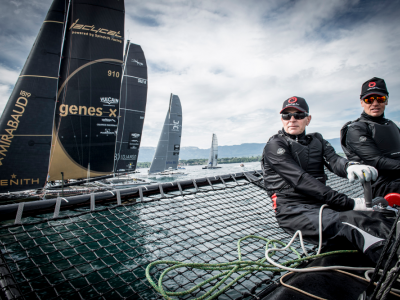 Alinghi’s D35 SUI-1, helmed by Ernesto Bertarelli, yesterday won the first Act of the Vulcain Trophy, the Grand Prix Les Ambassadeurs. After 13 races sailed in very variable wind conditions and with some tricky wind shifts, it was Alinghi who sat atop the leaderboard to take this first Act of the D35 2014 Championship. The team had fought with three other boats for the right to climb to the first step of the podium: Ladycat, powered by Spindrift, Mobimo and Realteam. With six different teams winning races, the level was extremely high and the season promises to be intense – the whole fleet has been training hard during the early days of the year and the crews looked super-competitive for this first event of the season. At the end of the weekend, Alinghi emerged victorious with Ernesto Bertarelli at the helm, Nicolas Charbonnier (tactic), Pierre-Yves Jorand (main), Coraline Jonet (Trimmer), Nils Frei (Trimmer), Yves Detrey (bow), in front of LadyCat Powered by Spindrift (second). Mobimo (third) and Realteam (fourth). The teams will do battle again in Crans-près-Céligny, May 24th – 25th.

What better way for Team Principal and helmsman, Ernesto Bertarelli, to celebrate his birthday than by winning the 2013 Vulcain Trophy, wrapping up the prize at the penultimate event of the season – the Grand Prix Grange & Cie, organised and run with typical brilliance by the Yacht Club de Genève. A lack of wind unfortunately put pay to Sunday’s racing, but Saturday saw six races sailed, with the D35s entertaining an appreciative audience at the Geneva Yacht Club as the boats tussled for position. Despite having to abandon the first round due to technical problems it was ‘Ladycat powered by Spindrift racing’ who claimed first place at the Grand Prix, their first victory of the season. Alinghi ran them very close and saw off the challenge of Realstone to take second place and, with it, the championship. Speaking after the race, skipper Ernesto Bertarelli talked about his team’s fourth Vulcain Trophy: “I am delighted with this result. As a crew we have been solid all season and this victory is the culmination of a huge amount of teamwork and effort. The Vulcain Trophy – precisely because it is a one-design championship – is truly demanding, bringing together international teams of huge talent. Consistency has been the key, especially with the many different types of conditions that we’ve faced – we’ve been successful across each, which is why my teammates and I are particularly pleased to have sealed the win.” The 2013 Vulcain Trophy Alinghi: 9 Realstone Sailing: 18 Zen Too: 21 Ladycat powered by Spindrift racing: 25 Okalys-Corum: 26 Team SUI9: 33 Tilt: 40 Nickel: 43 Veltigroup: 44 Ylliam-Comptoir Immobilier: 45 Oryx: 57