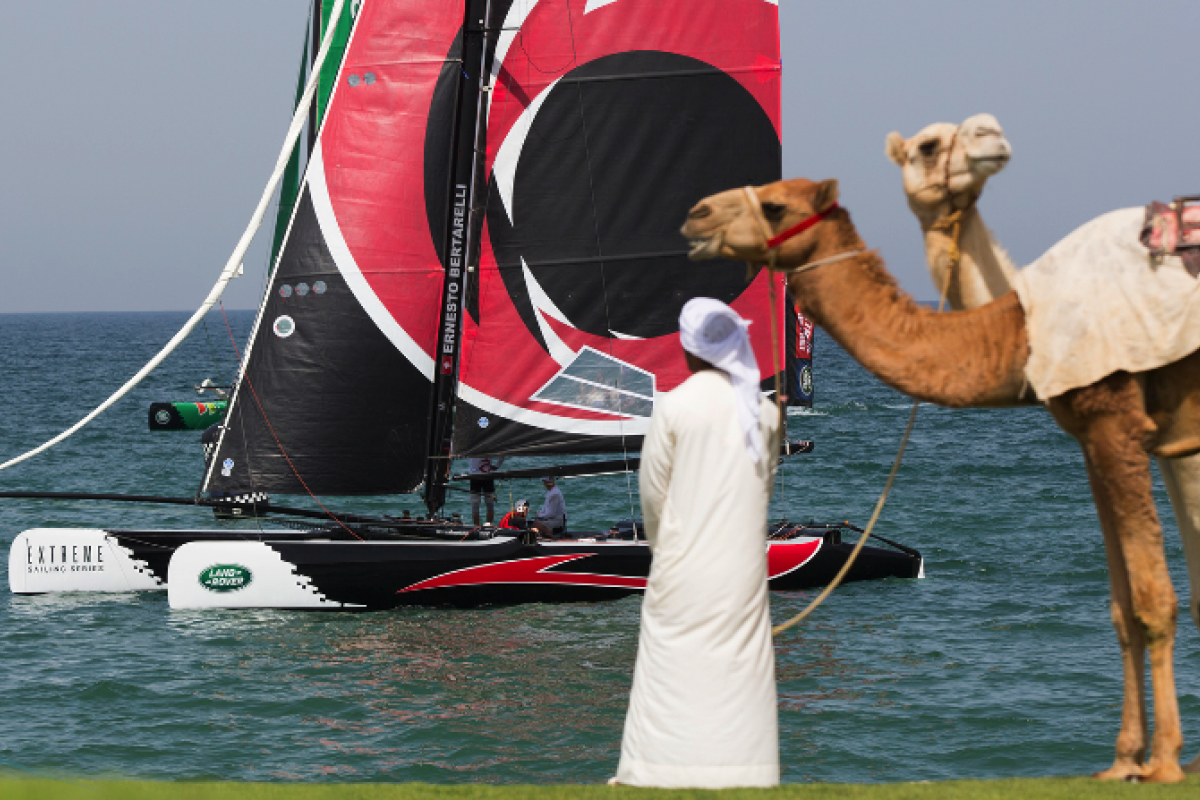 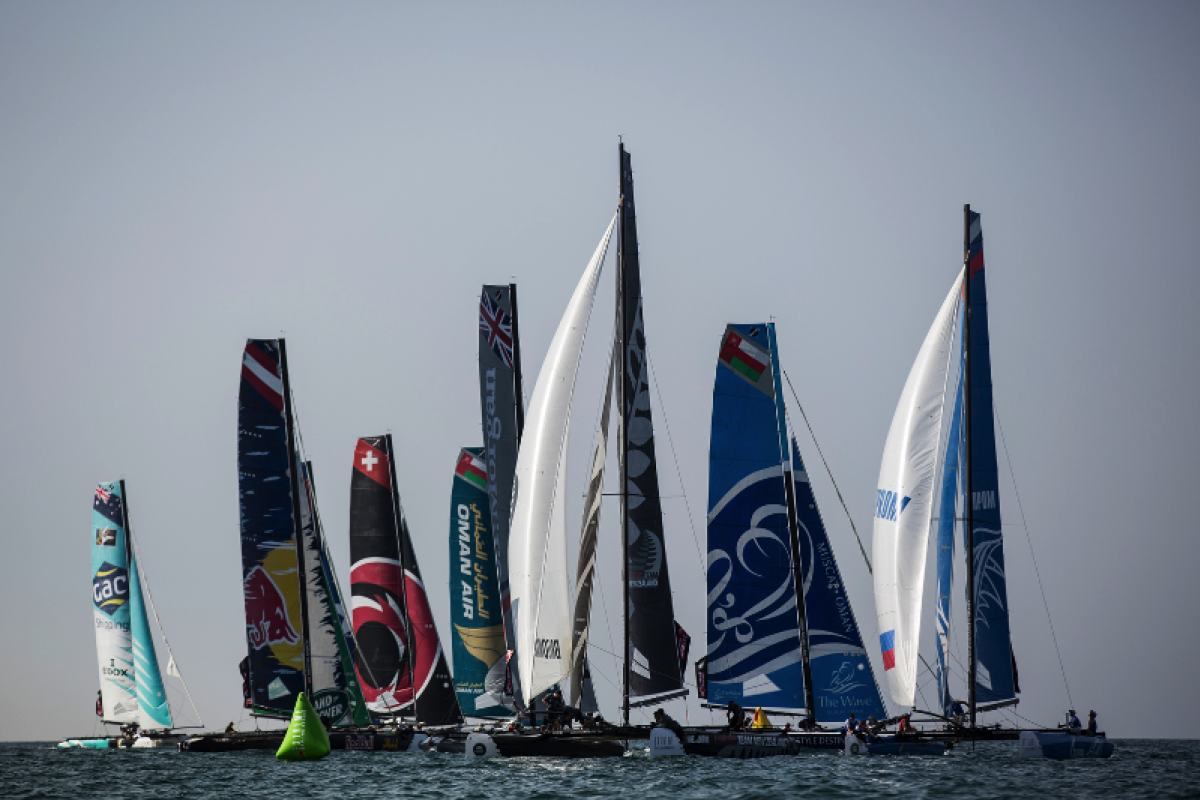 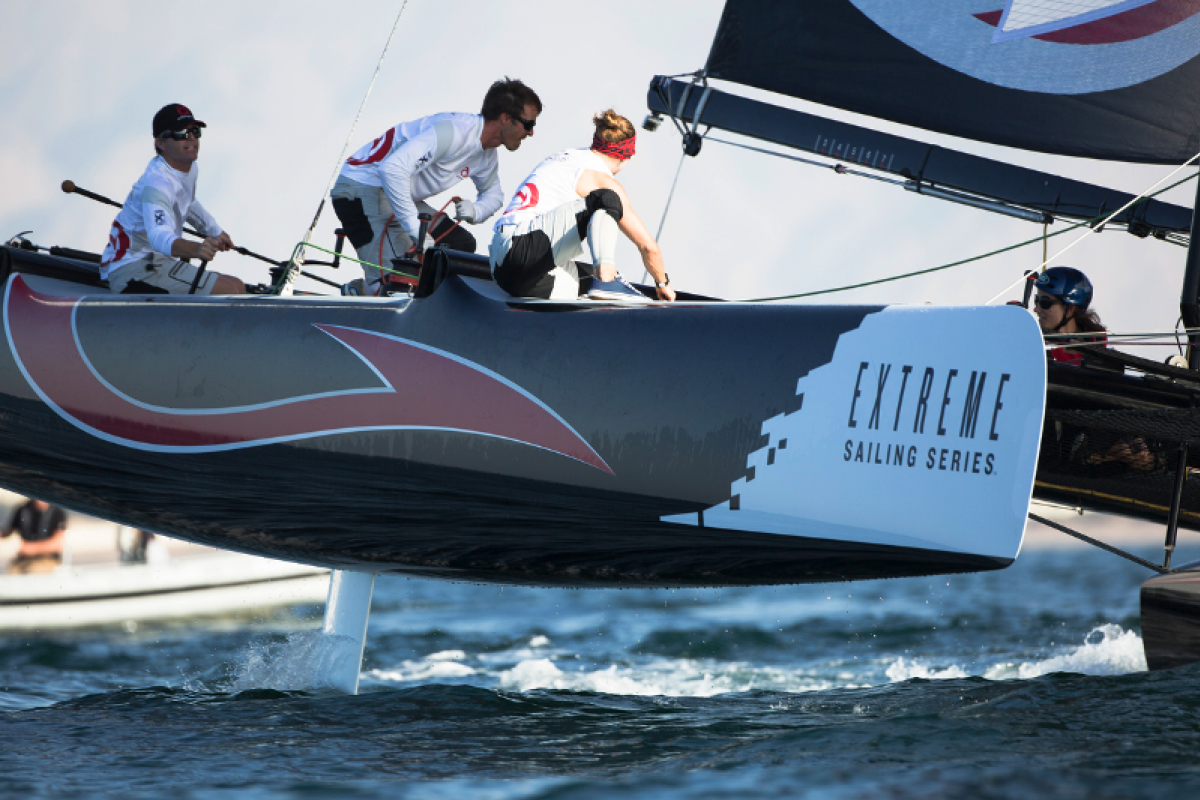 It was four days of extremely competitive and tight racing, in conditions that ranged from light to strong winds, for Act II of Extreme Sailing Series 2014 in Muscat, Oman. Having led the fleet heading into the final day, Alinghi ended up finishing 3rd behind ‘home’ team The Wave, Muscat and Emirates Team New Zealand. The final result was perhaps harsh on Alinghi as the team were caught up in ‘traffic’ at critical times, though no one could doubt the skill with which the defending champions handled the tough course on the final day of racing.

During the majority of the Act, Alinghi had handled  the light wind conditions wonderfully, particularly at the start line, and were leading heading into the final day. Then, however, conditions changed completely, with steady winds of 20 knots supplemented by gusts of 26. That meant that power and brute force became the order of the day, with teams hurtling to the windward mark before unfurling gennakers and powering downwind.

For the crowds watching, it undoubtedly made for a great spectacle, but it also made for crowded and high-octane racing and Alinghi were unlucky to be caught-up on a number of occasions.

Nonetheless, heading into the double-pointer final race, the team were very much still in the hunt, alongside three others: The Wave, Emirates Team New Zealand and SAP Extreme Sailing Team. Indeed, only four points separated the rivals and 20 were up for grabs. Unfortunately, it was not to be for Ernesto Bertarelli’s team, with a fourth place in the race putting pay to their hopes of replicating their victory in Act I.

“We should be pleased with the result in such a tough field but we were quite disappointed with how we sailed today. We need to do a better job staying out of the fray and we didn’t achieve that today and The Wave, Muscat did and you’ve got to hand it to them, they earned the win. It’s a long season ahead and if we can keep on the podium this year we’ll have a shot at the title at the end of the year, this will be our objective”.