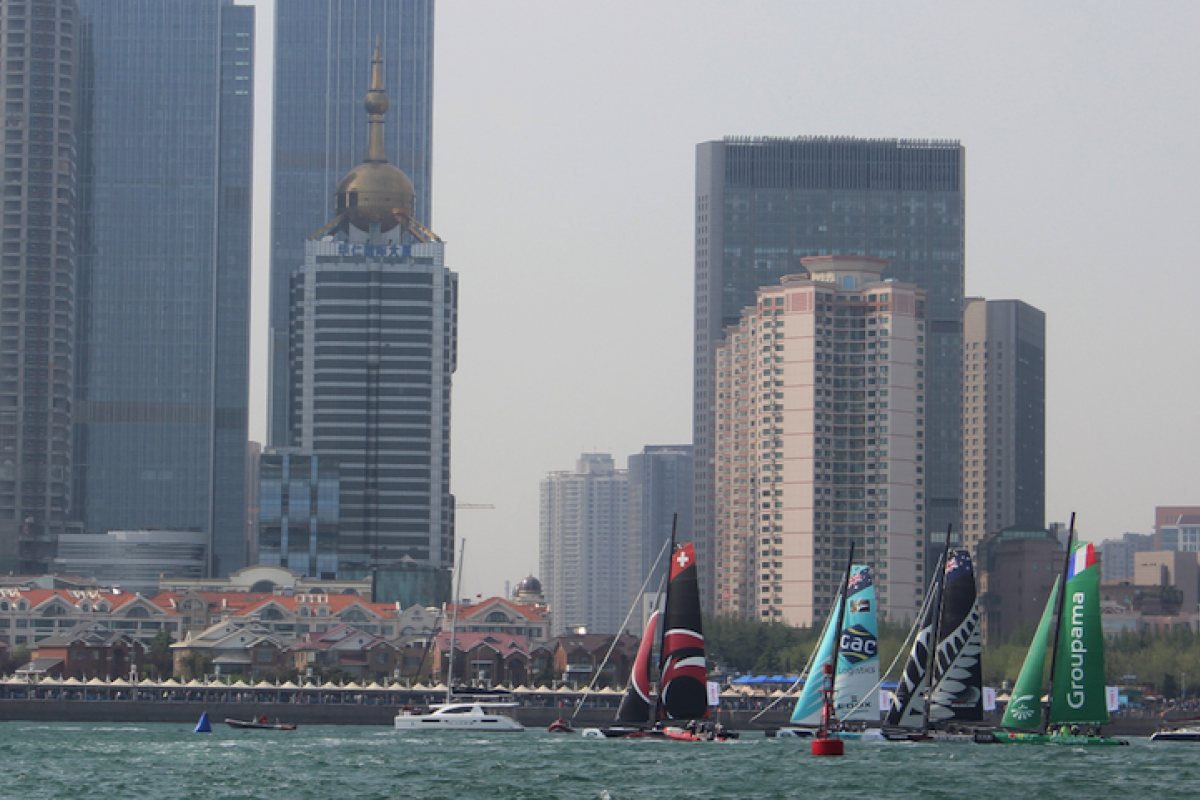 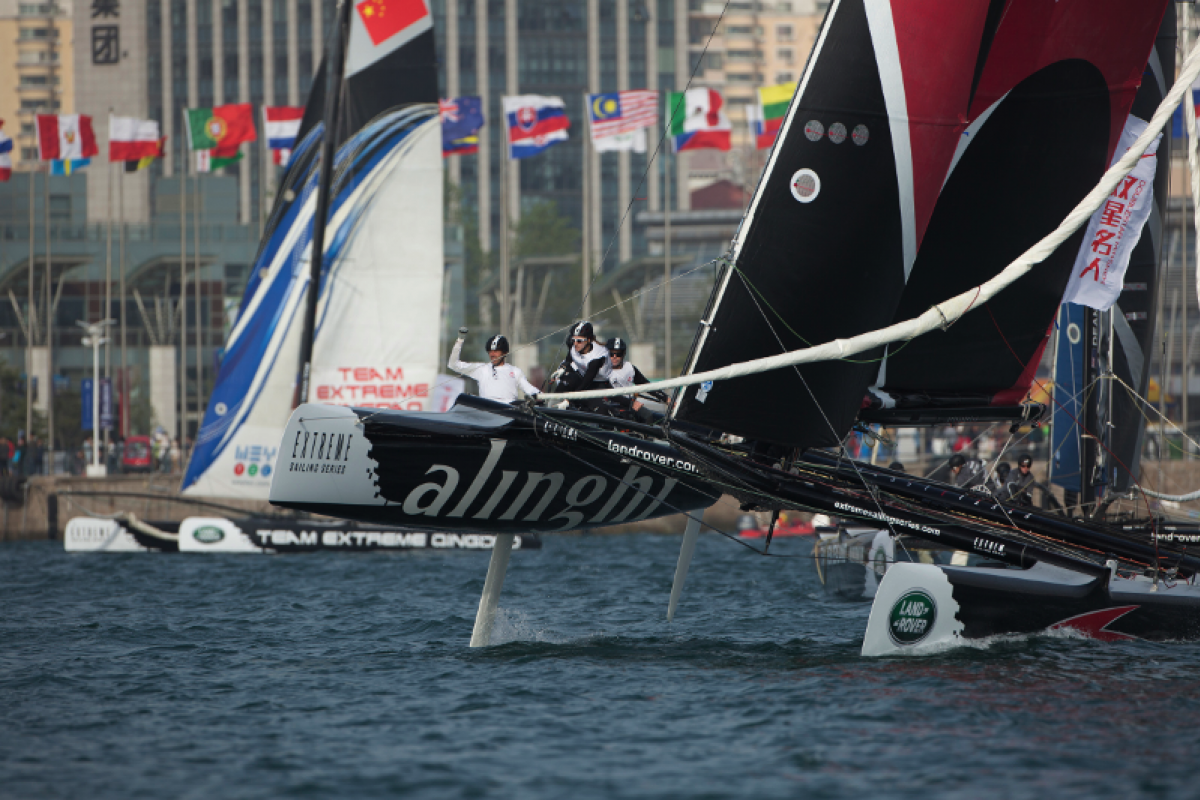 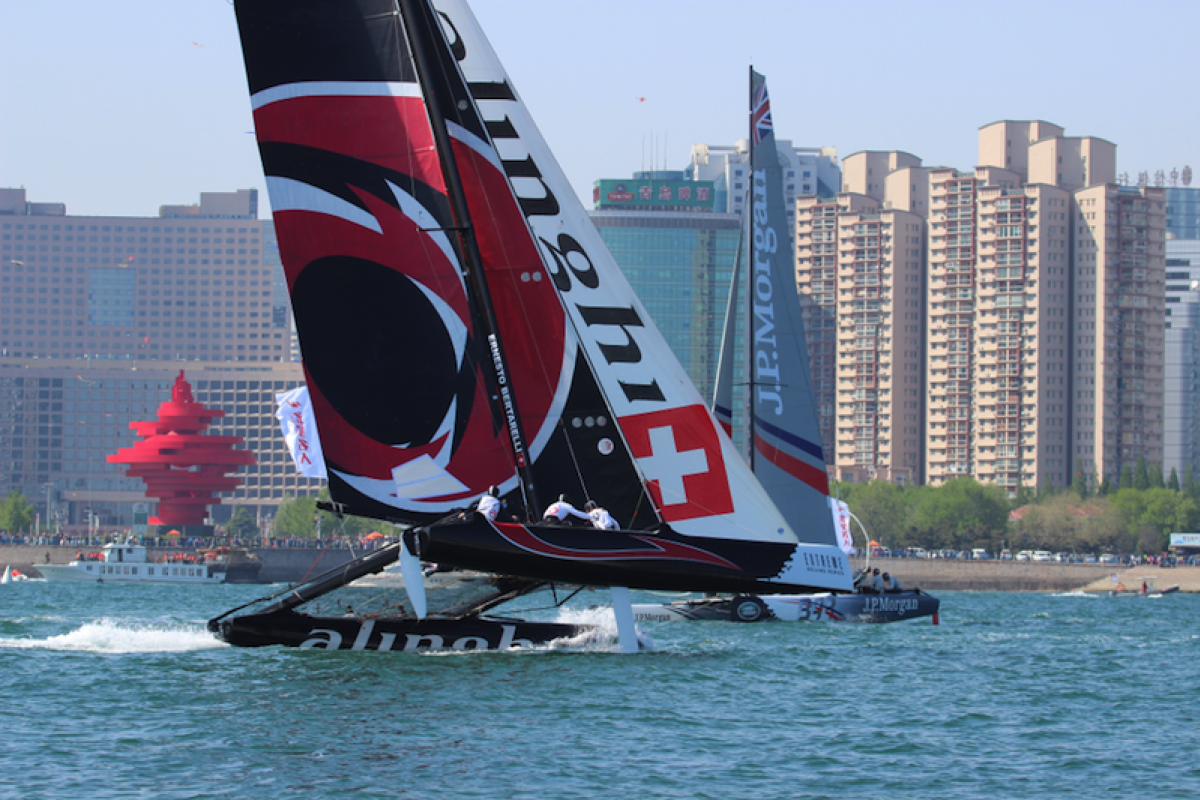 Alinghi emerged victorious from Act 3 of the 2014 Extreme Sailing Series in Qingdao despite being victim of one of the biggest and most spectacular crashes in the Series’ eight-year history.

The team had led the Act since race one and it was this relentless consistency – combined with a redress awarded by the international jury following the collision – that ultimately saw them secure the victory and move two points clear at the top of the Series leaderboard. Throughout the Act conditions had varied wildly, with light winds on the first day giving way to gusts of up to 32 knots on the second as the fleet moved into stadium racing mode.

“At times the boat that would come off the line last would go on to win races. That goes to show that today there was opportunity, whereas yesterday you needed to have a good start and the positioning needed to stay the same – with the shifty winds today it really created opportunity. Most of the time you have to be aggressive on these boats to do well, if you back off and be conservative that’s when trouble seems to happen. So balancing that today was really key and I think we did a good job – we positioned ourselves conservatively but we sailed the boat physically hard, and I think the results show.”

The results did indeed show and Alinghi went into the final day looking to maintain their lead of ten points over the fleet. Ultimately they did so – finishing by the same margin ahead of fellow Swiss team Realstone – but that was perhaps not the main talking point of the day. In one of the final races of the day the unlucky Red Bull Sailing Team were caught by a huge gust that propelled them into Alinghi’s side in one of the biggest incidents of its kind in the history of the Series.

“We were lining up at the start, and approaching the line with ten seconds to go and most of the fleet was on port. Red Bull ducked behind us, the winds were shifty and up and down, there was too much of a puff and they couldn’t get the bear away and T-boned us – it happens. It’s great to have won, we had such a great regatta that it was bittersweet to end that way, but I think we earned it so it feels good. We’re just glad that no one was hurt and that the boat is repairable – it will take a week in a good boat yard, but it will be back and ready to race.”

Even though Alinghi’s crew had to watch the final races from the dock, the team took the Act victory after a redress awarded by the international jury. So now, with the fleet looking towards Act 4 in Saint Petersburg, Alinghi have stolen a march on their rivals and, with the Series reaching the halfway stage, will be looking to cement their lead.