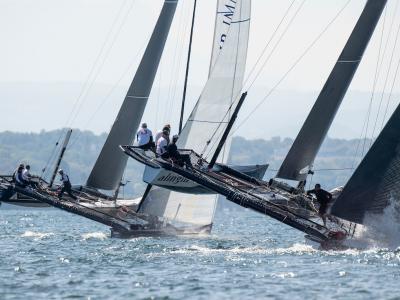 Despite lighter wind conditions than last week, the team – in its new configuration following the injury to Nils Frei – struggled to hit its marks and to get ahead of the fleet compared to the way it had done in the earlier part of the season. At the end of the six races that were run, Alinghi finished this seventh round of the season in sixth place (20 points), tied for points with fifth, Swisscom. Realteam wins the event (13 pts), followed by Ylliam-Comptoir Immobilier (16 pts) and Zen Too (17 pts). Pierre-Yves Jorand, mainsail trimmer: "We had fairly standard wind conditions with a small Séchard of 6 to 8 knots in this edition of the Alinghi Grand Prix. Once again, teamwork was everything, but also every detail counted, especially given the minute differences in speed between each boat. Every centimeter was important, and every mistake, whether at the level of a maneuver or in terms of team communication, was critical. "The ranking in the annual championship has narrowed, with three boats still able to win the D35Trophy. The last confrontation will take place on the same kind of race area in fifteen days' time, with a sea breeze maybe a bit different given that it will be later in season." In the 2018 provisional D35 standings, Alinghi still leads the fleet with 14 points, followed by Zen Too (20 pts) and Ylliam-Comptoir Immobilier (21 pts). The entire team will meet you from September 21st to 23rd for the Realstone Grand Prix presented by the Musée du Léman and organised by the Société Nautique de Nyon.   Click here for the rankings To find out more d35trophy.com Event hashtags #GoAlinghiGo // #D35Trophy If you want to know more about how to follow the racing, about Alinghi's team, or just about this regatta in general, you will find all that you need in this news story. Credit for photos © Loris Von Siebenthal

After 11 races of about 30 minute duration each and after a duel that came down to the final metres, Alinghi beat Ylliam Comptoir Immobilier by one point to win the Alinghi Grand Prix of Crans-près-Céligny. Zen Too took the final place on the podium. Yves Detrey, bowman, said: "It was tense to the end with Ylliam. We started the day tied, but already lost three points on them in the first race. Then we gained one back in the second race, and then two in the third, to leave us once again tied. "In the very last race, we fighted a bit at the start and we took the first advantage on the upwind leg. They managed to come back ahead of us just before the last leg. In the final downwind to the finish, we passed back in front of them with a better gybe. To win this Grand Prix, we had to finish in the top five and ahead of them in this last race. This we did - we were 4th and they were behind. Ylliam sailed really well, but in the end, we stayed ahead, and this makes me really happy." Pierre-Yves Jorand, mainsail trimmer: "It started this morning with a 5th place finish, but fortunately for us, it was ended really well. Ylliam Comptoir Immobilier's competitive sailing made for a great weekend and they certainly gave us a hard time. They sailed very well. Hats off to them! They were fast and were smart. In the end, these regattas are serious business. In these monotypes, we know that every detail counts. It was a superb Grand Prix over three days." With this new victory and a sufficient points gap on its pursuers, Alinghi is guaranteed to win the D35 Trophy 2017 without even needing to run the last event. But, as Arnaud confirmed tonight, "the team will still be fighting at the start in two weeks time because "there is always more to learn". Click here to be onboard the D35 seconds after crossing the finish line to listen to all the comments (in French) from Yves, Pierre-Yves, Arnaud and Nicolas. The next meeting on the lake is on Friday 22 and Saturday 23 September for the closing Grand Prix in the D35 Trophy organized by our club, Société Nautique de Genève. Alinghi Grand Prix in Crans-près-Céligny - Overall standings after 11 races (the worst score being discarded) : 1 - Alinghi: 24 points 2 - Ylliam comptoir Immobilier: 25 points  3 - Zen Too: 34 points 4 - Racing Django: 36 points 5 - Realteam: 49 points Click here for more results and the overall standings of the Championship after seven Acts. To find out more d35trophy.com Hashtags for the event #GoAlinghiGo  //  #D35Trophy If you want to know more about how to follow the racing, about Alinghi’s team, or just about this regatta in general, you will find all that you need in this news story. Photo credits: Loris von Siebenthal 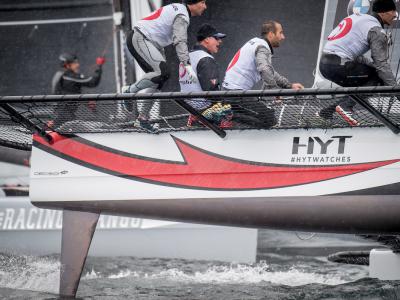 In Formula 1, the tyres are changed when it's raining. In sailing, it's just the crew's clothes that change. Remember, as long as there is wind, a sailor is happy! After two races yesterday, five races were held today in a steady wind that tested the physicality of the 54 sailors competing in the Alinghi Grand Prix in Crans-près-Céligny. After a great start to the regatta (a 2nd, three 1st place and a 3rd), Alinghi finished the day with two relatively disappointing results. Ylliam-Comptoir Immobilier took the opportunity to draw level in the overall points position. Six points behind lie Zen Too, with Racing Django a point further back. Nils Frei, headsail trimmer, summed up the day: "The wind blew continuously between 11 and 18 knots. In a D35, that's hard work. We sailed with a reef in the main for four of the five races. We started the day very well with two wins without a worry. But then, in a more shifty wind, which is typical with the South-West, we experienced many changes in the wind direction, which challenged us and forced us on the back foot. As a result, we are no longer leading alone, but with the tiebreaker rules in place we are at an advantage to Ylliam, having won more races than them By the way, to practice your French and learn what the word « empannage » means (« gybe » in English), we attempt to explain it at the end of the day interview with Nils and Coraline. The finale of the Grand Prix Alinghi will be taking place tomorrow between 11:30 and 16:00 on the Lake, in front of the Club Nautique de Crans. Alinghi Grand Prix in Crans-près-Céligny - Overall standings after seven races (the worst score being discarded) : 1 - Alinghi: 13 points 2 - Ylliam comptoir Immobilier: 13 points  3 - Zen Too : 19 points 4 - Racing Django: 20 points 5 - Realteam: 27 points 7 - Mobimo: 39 points 8 - Okalys : 40 points 9 - Phaedo2 : 42 points To find out more d35trophy.com Hashtags for the event #GoAlinghiGo  //  #D35Trophy If you want to know more about how to follow the racing, about Alinghi’s team, or just about this regatta in general, you will find all that you need in this news story. Photo credits: Loris von Siebenthal