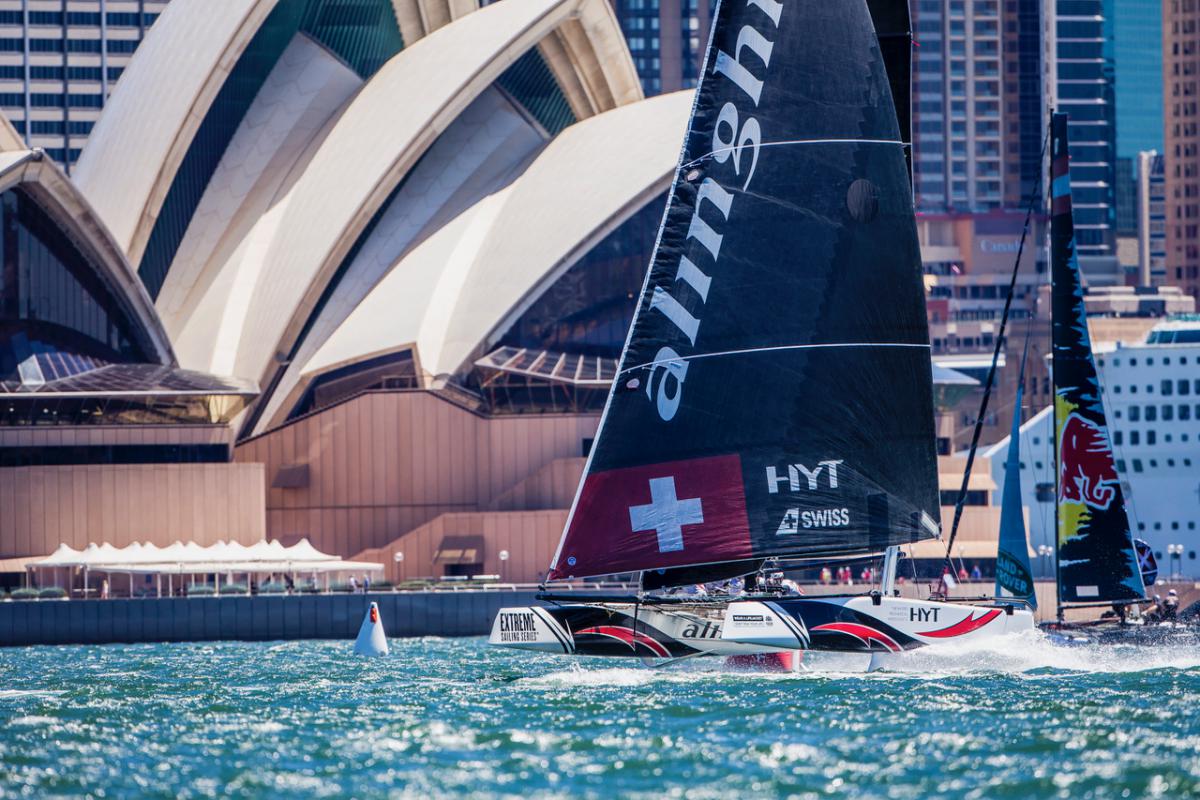 Six races overall, four for each team (with the fleet sailing in two groups in the afternoon), about twenty laps around the course's buoys, and as many turns and gybes by each boat, and all in a wind that varied from eight to 22 knots and under the beautiful Australian sun. Such were the ingredients for Day 2 of the final Act of the 2016 Extreme Sailing Series™ in Sydney.

Pierre-Yves Jorand explains the decision to split the fleet in two: "One of the peculiarities and attractions of this Series is that the spectators can get close to the boats as they race, much the same as you would from the stands in Formula 1. Given the strong and unstable wind we had today, shifting in force and direction, the Race Director had no choice but to split the fleet to launch the early races in a confined area close to the Royal Sydney Yacht Squadron."

Sailing in this configuration, Alinghi won both of the runs, having made good starts, maintained good speed and made good manoeuvres.

Nils Frei takes up the story of the rest of the day: "A change in the direction of the wind meant that the course could be reconfigured and the whole fleet could race as one. With eight boats on this narrow course you can quickly find yourself in traffic if you don't take a risk at the start.

Some teams certainly took this approach to try and find clear water. That can pay off, but it can also go the other way, for example going across the line too soon or executing the start poorly. Given where we stand, we went for conservative starts, which is why we recorded 4th and 5th place finishes. We can be happy with our day, because with this kind of race format anything can happen."

In terms of the battle for the Series podium, all three contenders scored a similar amount of points on Day 2. Although Alinghi relinquish one point to Oman Air, the Swiss team still lead the standings at the halfway point of this grand final of the 2016 season.

After seven races for each team (two per team were in the split fleet format, meaning Sydney Harbour has seen nine races overall) the general standings read:

Find all of the results in detail at http://www.extremesailingseries.com/results/2016-Sydney

With up to eight races on each of the four days, there will be plenty of sport to enjoy, though do watch out for the time difference: UTC + 11, i.e. + 10 hours compared to Swiss time.

Online, via the Alinghi homepage (www.alinghi.com)
- Races modeled in 3D from December 8 to 11
- 90 minutes of live pictures on Saturday 10th and Sunday 11th afternoon (from 3.30pm to 5pm local time)
- Replay available at the end of the races

On Facebook @teamalinghi:
- Pictures and video interviews throughout the regatta
- Live broadcast of the awards ceremony - Sunday 11 December from 17.45 local time (= 7.45 in Switzerland)