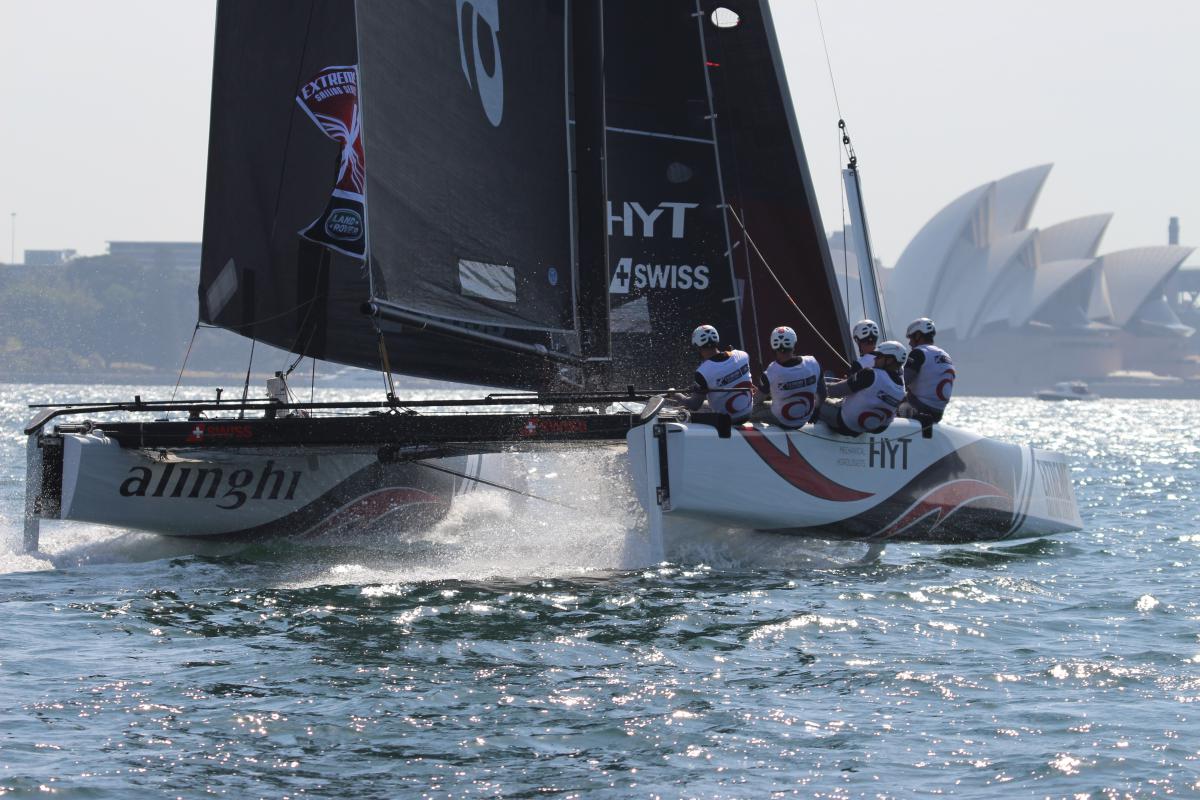 After its triumph on a monohull in the America's Cup and numerous victories on multihulls in the Decision 35 and Extreme 40 competitions, this week sees Ernesto Bertarelli’s Alinghi try to add foiling catamarans to the list of boats on which they’ve won championships.

Starting next Thursday the 8th and running until Sunday the 11th  Sydney will play host to the last Act of the 2016 Extreme Sailing Series™ (ESS) with eight international teams doing battle in the iconic harbour between the Opera House and the Royal Sydney Yacht Squadron. And at stake? A world-class sailing championship on the ‘flying’ GC32.

Timothé Lapauw, trimmer, comments: "Since September, we've had three wins in a row, so if anything the pressure is on our competitors in this last Act.”  And if there is pressure rising as the start in Australia draw closer, then it’s one that Tim enjoys. "Once on the water, I'm focused solely on my job. There is so much to do in this fast-racing format that I do not have time to think about anything else!"

The skipper, Arnaud Psarofaghis, says: "I know that the pressure generated by what is at stake will help us to raise our level. The goal is clear for us all – win! We are eager to do battle and we are confident, but certainly don’t take anything for granted because our opponents are so strong and anything and everything can happen in this kind of racing.”

Podium secured, but where upon it is not…

The general classification for the 2016 Series currently reads:

This eighth and final stage of the 2016 circuit counts for double, meaning the points in play in Sydney are 24 for first place, 22 for second and so on. In the case of a tie, the team best placed in Sydney will take the Series.

At this stage of the competition, a place on the final podium is assured for Oman Air, Alinghi and Red Bull Sailing Team, but it of course remains to be seen in which order the leading trio will stand upon it finish.

To win this championship, Alinghi must finish in front of Oman Air and not finish more than a place behind Red Bull.

What: Grand final of the 2016 Extreme Sailing Series™, which has seen eight Acts in eight host cities, on three continents.

Who: Eight international teams, each made up of a crew of five

Where: Sydney Harbor (Australia), between the Opera House and the Royal Sydney Yacht Squadron

How: Teams compete in short, fast races in front of the public on a 32-ft foiling catamaran, the GC32

With up to eight races on each of the four days, there will be plenty of sport to enjoy, though do watch out for the time difference: UTC + 11, i.e. + 10 hours compared to Swiss time.

Online, via the Alinghi homepage (www.alinghi.com)
- Races modeled in 3D from December 8 to 11
- 90 minutes of live pictures on Saturday 10th and Sunday 11th afternoon (from 3.30pm to 5pm local time)
- Replay available at the end of the races

On Facebook @teamalinghi:
- Pictures and video interviews throughout the regatta
- Live broadcast of the awards ceremony - Sunday 11 December from 17.45 local time (= 7.45 in Switzerland)