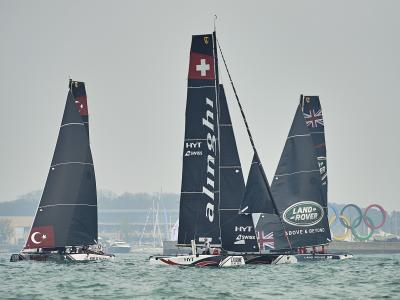 Going into day three of Act 2 in Qingdao, Alinghi were defending an overall lead and the team's experience on Lac Leman told. Light wind conditions meant for challenging racing and the team can be delighted to have registered two victories from the six races. After, co-skipper Arnaud Psarofaghis said: “We’re planning on starting well tomorrow and seeing what happens. We just want to stay clear of everyone else and stay fast.” Alinghi's lead at the top of the Act leaderboard is four points from Oman Air. Tomorrow's finale means there is all to play for... Photo Credit: Lloyd Images 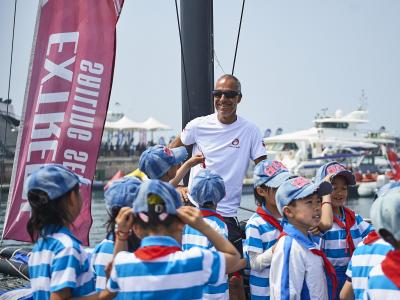 On day two of this Extreme Sailing Series Act 2, the whole team welcomed young students from different schools in Qingdao. After this visit to the Alinghi base, the team obviously benefited from their lucky charms, ending the day on top of the leaderboard having scored two wins and a second place from the five races sailed today. 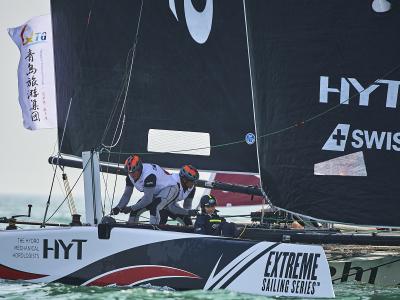 The Extreme Sailing Series Act 2 started today in Qingdao, China, with very light wind conditions allowing only one race to be sailed and that after a 50 minutes postponement. During this race, Alinghi rapidly took the lead and kept it nearly until the end. It was only during the last run, with the  winds dying and becoming patchy, that Alinghi were overtaken, falling to third, a position they kept after rounding the bottom gates and crossing the line behind BAR in first and Sail Portugal in second. Photo Credit: Lloyd Images 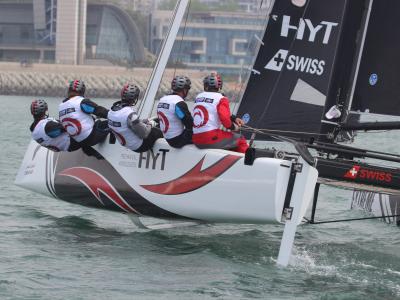 Act 2 of 2016’s Extreme Sailing Series begins tomorrow in the port of Qingdao, China, to which the teams return for the sixth time and where Alinghi had their epic coming together with Red Bull in 2014. Widely acknowledged to be one of the more challenging of venues, the city’s tall buildings around Fushan Bay make for wildly unpredictable and gusty winds. One thing’s for sure, it won’t be boring. Day one will consist of open water racing, after which the eight teams will move to the stadium for three days of competition that will conclude on Sunday 1st May. The full schedule is: Friday 29 April: 1400-1700 (GMT+8) Saturday 30 April: 1430-1700 (GMT+8) Sunday 1 May: 1430-1700 (GMT+8) Click here to follow the event live 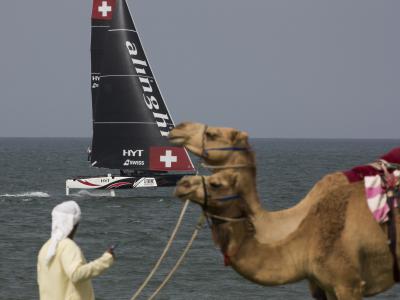 The second day of Act 1 of the 2016 Extreme Sailing Series in Oman began in auspicious conditions, with winds of 18 knots welcoming the teams to the line for the start of racing. However, after three races had been sailed there was a massive shift in the breeze, meaning that the Race Committee brought an end to proceedings for the day. Alinghi fared well in the races that were run, finishing in the top half of the fleet in all as they recorded a third, second and then fourth place finishes. That has left Ernesto Bertarelli’s team tied on points in fourth place with Land Rover BAR Academy and chasing Oman Air who lead the field by 14 points. Alinghi’s improved consistency was a big plus for Co-Skipper Arnaud Psarofaghis, who said: “Yesterday was a tough start for us, but today we were on our game and we are a lot happier with the result. We changed our communication onboard, especially on the starts, and we could see the progress. Although we have experience on the GC32, we can already see the other teams starting to get to grips with it, so we need to ensure we keep improving.” With two more days to sail, the game remains very open... as well as the podium places. Photo Credit:Lloyd Images 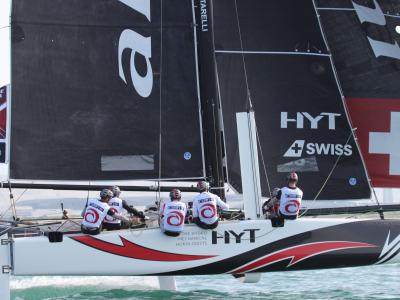 Alinghi will be back on the Extreme Sailing Series circuit tomorrow with 3 stadium regattas and a 20 mile Coastal Race between the Old Town of Muscat and the Wave – stay tuned and follow us online or onsite – all useful information are provided here. The crew for this first event will be – Ernesto Bertarelli (Helm), Arnaud Psarofaghis (Main), Nicolas Charbonnier (Tactic), Nils Frei (Trim) & Yves Detrey (Bow). Go Alinghi, Go! 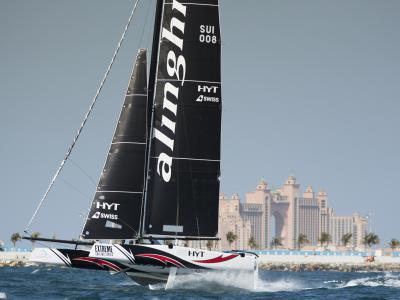