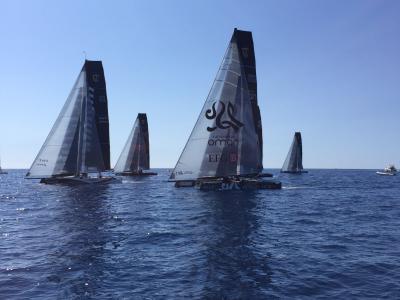 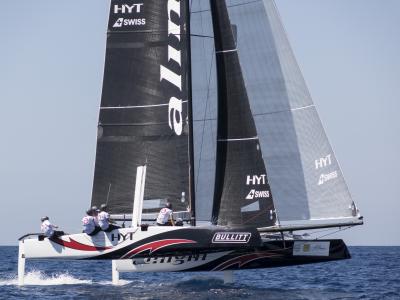 Today the breeze was better than expected, starts were great, but minor technical issues made the task harder than anticipated for the team. But let's bet that a 1st place in race 5 in lighter wind conditions has given the team confidence for tomorrow. Forza Alinghi!! Pictures credit: Sander van der Borch/Bullitt GC32 Racing Tour 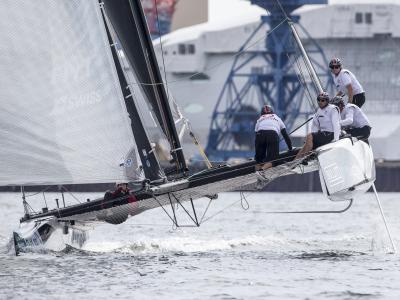 Alinghi’s awesome day – when they won six out eight races on Friday – ultimately secured this victory in the Sailing Cup Kiel, the team’s first overall victory on the 2015 Bullitt GC32 circuit. But the team were consistent throughout and secured the win in the final day’s penultimate race, which they took amid the variable winds that had characterised Sunday’s racing and, indeed, which had delayed the start of Sunday’s competition in the first place. Given the events on the first day, Morgan Larson had every right to be delighted: “I haven’t forgotten about that practice race on Thursday where we capsized and almost broke the boat on the rocks and somehow escaped it all. I’d say about half way through that capsize, I said a very bad word, and that was because I knew about all the work that went into getting here, and that we probably weren’t going to be in the race. We’re lucky even to have been racing here. To win is a massive bonus.” This result in Germany has some repercussions for the GC32 tour because, after three events, the team’s performance has seen Alinghi move within just a point of Oman, who lead the overall rankings. With the team full of confidence and breathing down the leader’s neck, who can wait for the next run in Rome, starting on the 27thAugust? Pictures credit: Sander van der Borch/Bullitt GC32 Racing Tour 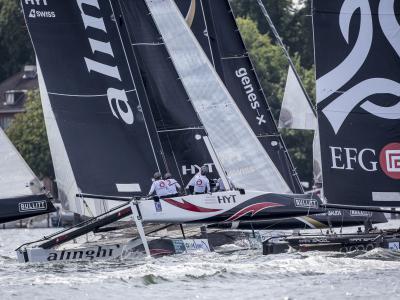 It would always be impossible to top – or even match – yesterday’s stellar performance and so it proved, but it was still a great day for Alinghi, who remain out in front at the top of the leaderboard ahead of tomorrow’s final day in the Kiel Cup. Honours were much more evenly spread today. With two victories Spindrift took the day, but with Oman and Armin Strom also winning races it meant that all teams have now tasted victory in the regatta. Six races were run in the Kieler Fjord under blue skies with a moderate northerly breeze. Each race saw places being swapped multiple times, especially as the wind picked up in the afternoon. Alinghi’s lead going into the final day is 11 points. With racing due to start at 11:00AM tomorrow, it looks like being an exciting finale! Pictures credit: Sander van der Borch/Bullitt GC32 Racing Tour 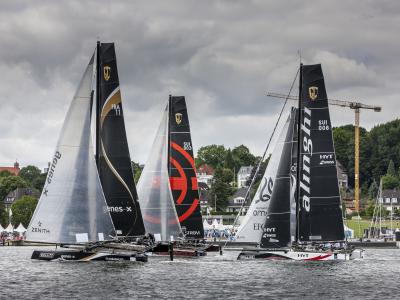 Was it their experience in the Extreme Sailing Series that provided the edge? Or was it just Alinghi’s day…? Either way, it’s hard to recall another occasion in recent memory when the team have performed as they did today in Kiel, dominating virtually from start to finish. After yesterday’s sailing had to be cancelled because of the adverse weather conditions, eight races were run on the imposing and tight Kieler Fjord. Somewhat incredibly, Alinghi won six of them, and even took a second and third place in the other two. This awesome performance has left Alinghi way out at the top of the leaderboard, but the team know that, with two days sailing to go, there is a long way to go. With that in mind, they are taking nothing for granted. Alinghi’s performance could be put down to a number of factors: the team working as one, expert reading of the gusts and lulls inside the Fjord, even a bit of luck. But if there was to be one defining element then perhaps it was how Alinghi – tactically – deployed and then got up on the foils. Waiting always and only for the opportune moment as they saw it, this sometimes saw Alinghi the last to deploy, but patience told. Roll on tomorrow! Pictures credit: Sander van der Borch/Bullitt GC32 Racing Tour 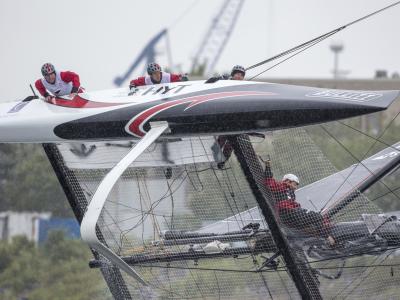 Big, big winds and even bigger gusts put paid to today’s first day of racing in the Kiel Cup. And it was one of those gusts that saw Alinghi in the drink, with a wildly shifting breeze causing a capsize during the media sailing session – as these spectacular photos attest. Thankfully all onboard were fine and Morgan Larson and the team returned their boat to the vertical with only a minimum of damage, though the team is hoping for a new mast head unit to arrive tomorrow, as that was one of the boat’s components that did take a hit. Following a quick break, the crew returned to the water to check that everything else was in working order and to prepare for tomorrow. We expect firm winds again, which should make for great racing. Pictures credit: Sander van der Borch/Bullitt GC32 Racing Tour 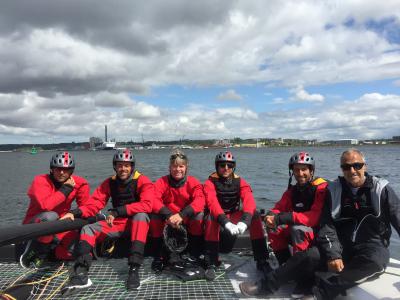 The 2015 Bullitt GC32 is heading north for its third leg, with the fleet travelling to Kiel on Germany’s Baltic Coast. A sailing hotspot, the port of Kiel – or Kieler Förde – will provide a tighter course than the GC32s have been used to so far, meaning a different sort of challenge over the four days of racing, which will start tomorrow (Thursday 30th) and conclude on Sunday. In theory – though, as we all know, theory can be very different from practice – this should favour the teams that have sailed in the Extreme Sailing Series. Alinghi, of course, are one such team and Morgan Larson had this to say about racing in the heart of the city: “I think it will make it more boat-handling intensive. It will push us for sure, but that is a good thing. The people in Kiel are really enthusiastic about sailing, so I think we’ll have quite a few checking it out. You are going to have a lot of people coming down just to see us foiling.” Typically, the GC32 tour courses are in the modern ‘America’s Cup’ style, with reaching starts and finishes, and two windward-leeward laps in between. For this event – dubbed Sailing Cup Kiel– the boats will instead sail three laps, or, occasionally, courses containing longer reaching legs. There might even be a slalom course. What is certain, however, is that bringing these foiling machines to such a unique and relatively confined arena – and one that is a real hub for sailing nuts – will make for adrenaline-fuelled entertainment. Alinghi’s team for the Sailing Cup Kiel is: Morgan Larson, Nicolas Charbonnier, Nils Frei, Yves Detrey and Arnaud Psarofaghis Check back here every day to see how they get on! 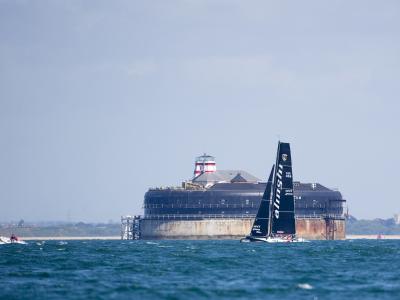 Over 1,500 boats undertook this classic race around the Isle of Wight. Alinghi finished second. Last year’s race was the slowest on record. This edition was much quicker. Conditions were good, with blue skies and wind – 12 to 15 knots from the west / south-west. The GC32s set off in the second start at 7:10AM GMT, running down to the southernmost tip of the Isle of Wight as they looked to catch-up and peg back the 100ft monohull Leopard and the MOD 70 trimaran Concise 10. By the time that the competitors had reached St Catherine’s, the gap on earlier starters (and bigger boats) was close. Closed so much, in fact, that Alinghi had edged into the lead of the GC32s. However, the team’s main rival – Sultanate of Oman – had managed to sail lower and maintained their advantage as both teams raced back into the Solent, it was neck and neck. As Alinghi skipper Ernesto Bertarelli said: “We were in front a couple of miles from the line. We played the shift and came back – it was match racing! I wish we had tacked to control – we believed in the left, but the right paid off.” This allowed Sultanate of Oman home first; Alinghi less than a minute astern.  “We weren’t more than a minute away from them for the whole race,” observed Paul Campbell-James. “I hope the America’s Cup is as exciting as this!” Despite narrowly missing the victory, Ernesto Bertarelli thoroughly enjoyed his third lap of the Isle of Wight. “It is a great course. I still think we should have gone between the Needles!”  Finish times (elapsed time) Sultanate of Oman 11:00:31 (03:50:31) Alinghi 11:01:27 (03:51:27) Team ENGIE 11:03:47 (03:53:47) Team ARGO 11:06:06 (03:56:06) Pictures credit: Sander van der Borch/Bullitt GC32 Racing Tour 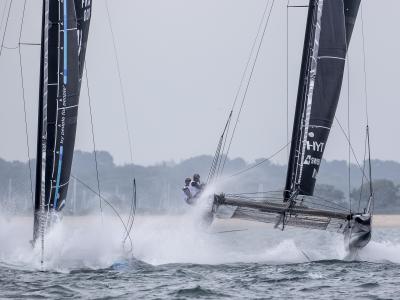 The third and final day of racing saw Alinghi move up to take third place on the podium in this, the second round of GC32 Bullitt tour. The team had a lot of fun in the Solent and learned much about their flying machine. Speaking after the racing had finished, Alinghi’s tactician Nicolas Charbonnier said: "These three days have been awesome! Today we had beautiful conditions, allowing us to get up on the foils. We laughed a lot, we had fun and, over the course of these 17 races, we have continued our relationship with this boat. “The first day went brilliantly, but we were constrained a little bit on the second by the light winds. We are going to work together to find the solution to dealing with such conditions and we’ll find the answer. Today was hard – physical, tough, wet. But that meant the action was fierce. We loved it! “Having sailed this event, for me, we’re entering a new type – a new dimension – of racing. The GC32 handles like a dinghy and then you have to add the factor of its flight. I’ve ever experienced this before and I am very happy to sail these boats. Welcome to the world of modern sailing!” The team will now head for a good meal before the Round The Island Race, starting tomorrow at 7.10GMT. We’ll be going for record! Pictures credit: Sander van der Borch/Bullitt GC32 Racing Tour 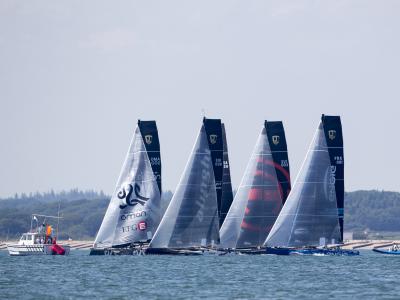 It was a tough day of sailing in the Solent on the GC32, with a lack of winds delaying the start of racing, though the blue skies above went some way to making up for it. The winds did pick up, but remained light. At the end, Alinghi lie in fourth position, just two points off Team Engie ahead of tomorrow’s final round of racing. Leading the field are the Sultanate of Oman, who had the best of the day, winning two of the day’s races and second in the rest. In second place on the leaderboard is Armin Strom. Alinghi’s starts were – apart from one of the runs – consistently excellent, nailing the timing, speed, deployment, acceleration… A combination of hitting bad air and rivals getting up on the foils first, meant that those starts were not converted into wins. The team is learning more and more about the boat and tomorrow we go again! The leaderboard after Day 2 is: Sultanate of Oman (27 points) Armin Strom Sailing Team (28 points) Team ENGIE (34 points) Alinghi (36 points) Team Argo (55 points) Highlights of Day 2 [VIDEO::http://www.youtube.com/watch?v=4kLru3w_pjE::news] Racing tomorrow starts a bit later around 13:00PM BST, due to the Round the Island Press conference. Pictures credit: Sander van der Borch/Bullitt GC32 Racing Tour